Living Among The Dead

“Nothing on this earth is standing still. It's either growing or it's dying. No matter if it's a tree or a human being.” - Lou Holtz

Mary-Anne Bloomfield was a classmate of mine through most of my high school years. My best friend dated her a couple of times. On their first date, Mary-Anne’s cousin was visiting from out of town so they set me up with the cousin to make it a double-date.

It was just a very innocent high school kind of date and no long term relationships developed from it.

In fact, the highlight of the evening was probably the flat tire we had to change on our way to the park where the high school event was being held.

What was a little unusual about it was that when we went to pick up our dates, we had to drive into the center of the Barrie Union Cemetery.

That’s where Mary-Anne lived. It wasn’t quite as freakish as an Addams Family or Munsters episode, but it was out of the ordinary.

Coincidentally, several years later when Mary-Anne’s father retired as caretaker of the cemetery, I applied for his job. Had I been hired, I too would have lived in the middle of the cemetery.

However, I feel like I live in the middle of a cemetery today.

There are no people buried here. At least not that I know of, but there are markers of the deceased all around.

When we first purchased our new home I was so happy to see all the trees that adorned our property.

Sadly a few of them have since gone. Left behind as a memory however, are their stumps.


I think tree stumps are like headstones in a graveyard. They are solemn reminders of a living creature that once graced the area, providing a home to birds and small animals and adding beauty to the landscape.

Like an inuksuk the stumps simply say, “I was here.”

Just like people there are different races of trees, but unlike people they don’t seem to have a problem coexisting amongst each other.

Trees provide us with oxygen, shade and shelter from the harsh winds. Some will provide us with ingredients for medicinal teas. Others will give us sweet nourishment that will enhance the flavour of our foods.

Some trees undress before they go to sleep for the winter months and will not dress themselves again until they awaken in the spring.

The more risque ones will teasingly shed a few of their clothes at any time throughout the year, while ensuring they always have another layer on to hide their nakedness and protect their modesty.

So why wouldn’t I grieve when a tree falls just as I would grieve the passing of a dear friend?

I don’t mind that their stumps are left behind nor do I feel a need to have them removed. I prefer to recognize their existence and the important roles the trees played when they lived.

One day even the tree stumps will be gone. But I will more likely be gone before them. And one day, like the mighty trees that once stood proud and tall on this property, I too will be forgotten.


“It is upon such stones that men attempt to permanently etch history so they will not exist in a vacuum; it is the final statement after a lifetime of scratching out divisions upon the ground, over ephemeral time itself, merely to give their short journeys meaning, to tell others “I was here – do not forget me, do not let my brief blast dissolve into nothingness.”  - Rob Bignell

Some of the "Tree Tombstones" on our property were here long before our arrival. 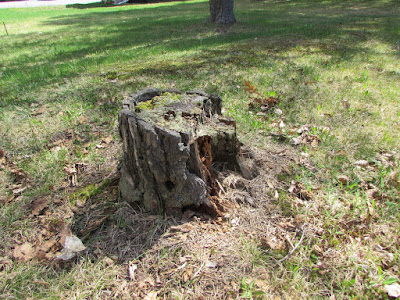 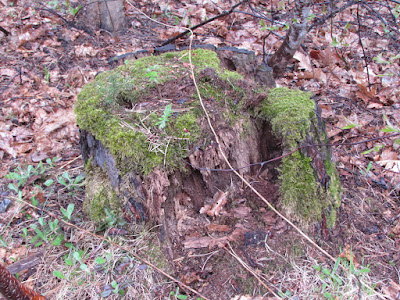 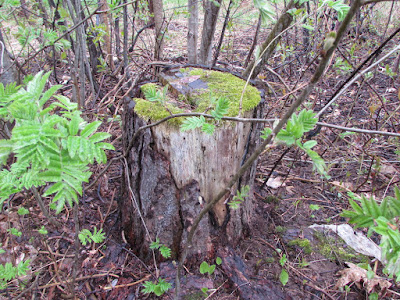 “He thought himself awake when he was already asleep. He saw the stars above his face, whirling on their silent and sleepless axis, and the leaves of the trees rustling against them, and he heard small changes in the grass. These little noises of footsteps and soft-fringed wing-beats and stealthy bellies drawn over the grass blades or rattling against the bracken at first frightened or interested him, so that he moved to see what they were (but never saw), then soothed him, so that he no longer cared to see what they were but trusted them to be themselves, and finally left him altogether as he swam down deeper and deeper, nuzzling into the scented turf, into the warm ground, into the unending waters under the earth.” - T.H. White 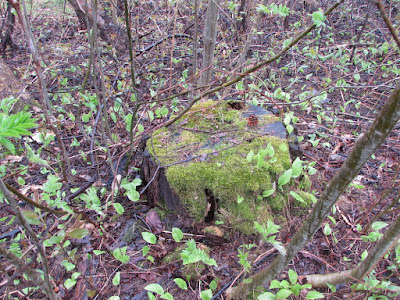 The moss that is covering the "Tree Tombstones" is slowly reclaiming the last reminders of these once magnificent masterpieces.

“In the sweat of thy face shalt thou eat bread, till thou return unto the ground; for out of it wast thou taken: for dust thou art, and unto dust shalt thou return.” - Genesis 3:19

- jim Young Thanksgiving chores when I was young, Was a weekend filled with laughter and fun.We’d head to Muskoka to tie off the docks,Then carry the boats up over the rocks.Stored in the shed were motors and oars,Gas cans, lifejackets, paddles and more.Things put away and stored for the year,Memories shared o’er a few pints of beer.The young ones scampered through the woods to play;Or fish from the rocks to help pass the day.Capture the flag, building forts, catching leaves,Hide and seek, or just climbing trees.We’d cut down a tree, sometimes two, maybe more,Cut, split and piled, near the back door.While the men worked hard at growing some blisters,Mom busied herself with the help of my sisters,Preparing stuffed turkey, potatoes and treats.There was always something good to eat.The meal was enjoyed in happy reminisce, With a tear shed in memory of loved ones we missed.Plates were emptied as we sat back with a sigh,Then dessert would be served in the form of a pie.Apple or pumpkin, with…
More... »

- jim Young“Based on the state of politics in the world today, is there really any such thing as ‘political correctness?’” - jim Young

Dear Journalist Katie: (Or whoever is the true originator of this meme.)
While I recognize your right to interpret anything I say or do based on your personal, past life experiences, I hope you will not be disappointed by my total disregard for this opinion you have shared.
Actually, I kind of resent the fact that you are automatically including me in a group without knowing anything about me, based solely on my gender. Isn’t that in fact counteractive to the very point you are trying to make?
I hold doors open for women and I will continue to do so regardless of your misinformed interpretation of what that might mean to you. I also hold doors open for men; and children; and the elderly; and the physically challenged; and people of any race, colour, age, sex, religion or political affiliation.
Why? Because unlike you, my first assumption about everyone I me…
More... »